Strong demand from Asia has boosted Australia’s position in the world's most comprehensive and long-running competitiveness study.

Strong demand from Asia has boosted Australia's position in the world's most comprehensive and long-running competitiveness study.

For the first time in decades, Singapore (1) and Hong Kong (2) pushed the US (3) from first place. However, according to IMD, they are so close it is better to define them as the leading "trio".

Of Australia's ranking, CEDA's Chief Executive, David Byers, said the rise to 5th place pointed to the relative strength of the domestic economy and its resilience to economic cycles. As strong Asian demand for commodities had underpinned the rise, it emphasized the critical need to maintain high levels of investment in the resources sector. "The Yearbook provides independent, international verification that Australia is in a solid comparative position after the GFC", Mr Byers said.

"Yet the rankings also reflect familiar weaknesses. Australia likes to think of itself as a great trading nation yet in reality, international trade as a proportion of GDP is relatively low by world standards. A 2007 CEDA Report, Competing From Australia, noted that Australia is relatively weakly integrated with the global economy, ranking 20th out of 22 nations for "trade intensity" - that is, international trade as a percentage of overall national economic activity.

"The terms of trade remain in Australia's favour but we need to build on our services and resource industry strengths and boost exports as a percentage of overall GDP", he said.

In this context the Federal Government's plan for a Resources Super Profits Tax could become a real concern.

"Mining is a risky business and like other risky businesses, the distribution of profitability has a greater variance than the more predictable manufacturing and services sectors. The proposed "super profits" tax is a tax on all uncertain (that is, most) projects and risks sending capital investment elsewhere. The proposal to tax those that are most successful is a tax in fact on all prospective and uncertain investments, not a tax on so-called pure economic rent," he said.

The results also highlight the importance of delivering a robust competitive telecommunications industry through a variety of channels.

"Infrastructure has dropped another six places in the rankings due primarily to low rankings in technological and telecommunications infrastructure ", he said. 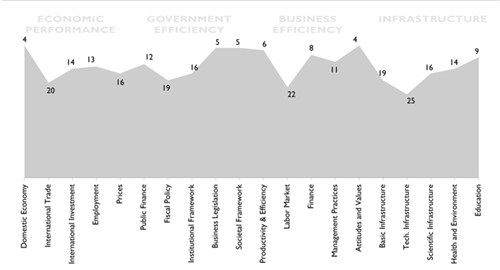 "Improving delivery of broadband services remains an issue but previous work by CEDA suggests that the Federal Government's current approach is not the way to go. The proposed National Broadband Network is a $43 billion mistake. The task is to promote real competition across the four infrastructure 'doors' - copper telephone lines, wireless, coaxial cable and fibre - allowing rivals to differentiate their services and compete more vigorously along their supply chains."

The survey shows the biggest decline in overall performance for Australia (measured by largest percentage change) was in the government's financial position, with the budget deficit increasing from -0.4 per cent of GDP to -4.87 per cent of GDP. Three of the top five nations (Singapore, Hong Kong and Switzerland) were in a stronger Government budget position (measured as surplus/deficit % GDP).

The Yearbook was compiled before the federal budget released earlier this month.

About the World Competitiveness Yearbook

The Yearbook is produced by IMD, one of the world's top business schools, with the help of CEDA and other international partners. Its rankings and country-based data sets are used by business and governments around the world.

Queensland is the economic superpower of Australia and is expected to outperform all other states in 2015-16, Deputy Premier and Minister for State Development, Infrastructure and Planning the Hon. Jeff Seeney told CEDA's Queensland Economic Development Forum.

Government policies that foster strong economic growth are a priority for the Coalition if elected in September, Federal Opposition Leader, Tony Abbott, told the audience at CEDA’s launch of its 2013 Economic and Political Overview publication in Sydney.