Announcement from the CEDA CEO

To all CEDA Members and Trustees, welcome back for what promises to be a prosperous and successful 2017. As some of you may know, my second three-year appointment as Chief Executive is coming to an end in March 2017, and, after much deliberation, I have decided not to seek a further term.

Back to all media releases articles 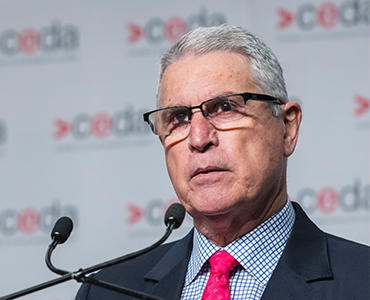 Too few people, whether in politics, business or sport, know when to go, and to go out when they are perceived to be on top. Former New Zealand Prime Minister John Key recently set an example and I hope I am, or will be, seen in a similar way.

Last year was the most successful year in CEDA’s 56-year history, and I dare say one of the most successful years in terms of ambition and scope of the organisation’s research and event agenda. In handing over the CEDA reins,
I leave the organisation in a strong position, as Australia’s leading independent public policy and research body, ready for a new Chief Executive to hit the ground running and take CEDA to the next level.

CEDA’s enviable position has undoubtedly been a team effort, achieved through the enthusiasm, creativity and hard work of the state and national teams. Through their efforts, CEDA has continued to attract senior advocates to speak at our events, increase member attendances, and grow media interest in our output.

I would also like to acknowledge and sincerely thank the contributions and guidance of the CEDA Board, Governors and State Advisory Councils and CEDA’s Council on Economic Policy (CCEP) members. It is through the input of members of CEDA’s board and advisory groups that CEDA keeps its finger on the pulse of Australia’s economic and political landscape.

I will be staying until the process of selecting my successor is complete to ensure a smooth handover.

In the meantime, it is business as usual; the show will go on, even if Elvis will be leaving the building. We have the 2017 EPO publication release and series of events in February and March and I look forward to catching up with many of you at these publication release events.

Closer to my departure date, I will be in touch with final goodbyes, and of course to update you on the new appointment. Until then, go forth and lift the productivity of this great nation.

CEDA – the Committee for Economic Development of Australia – is an independent, not-for-profit membership organisation.

We identify policy issues that matter for Australia’s future. We work to drive policies that deliver better economic, social and environmental outcomes for Australia. We deliver on our purpose by: Leveraging insights from our members to identify and understand the most important issues Australia faces. Facilitating collaboration and idea sharing to invoke imaginative, innovative and progressive policy solutions. Providing a platform to stimulate thinking, raise new ideas and debate critical and challenging issues. Influencing decision makers in government, business and the community by delivering objective information and expert analysis and advocating in support of our positions. CEDA's membership spans every state and territory and includes Australia's leading businesses, community organisations, government departments and academic institutions. The organisation was founded in 1960 by leading economist Sir Douglas Copland, and his legacy of applying economic analysis to practical problems to aid the development of Australia continues as we celebrate 60 years of influence, reform and impact across the nation.;

This budget provides crucial stimulus across much of the economy to help meet the historic challenges of the COVID-19 recession, but much more needs to be done to reignite sustainable, long-term economic growth.

CEDA is saddened to learn of the passing Sir Arvi Parbo AC, Patron and former member of the Board of Governors of CEDA. Sir Arvi passed away on 1 May 2019, aged 93.