State of the Nation 2016: policy must change in digital age

The creation of new public goods built by private interests such as Google and Facebook are challenging our way of thinking about markets and policy, Lateral Economics Chief Executive Officer, Dr Nicholas Gruen has told CEDA’s opening session at the 2016 State of the Nation conference. 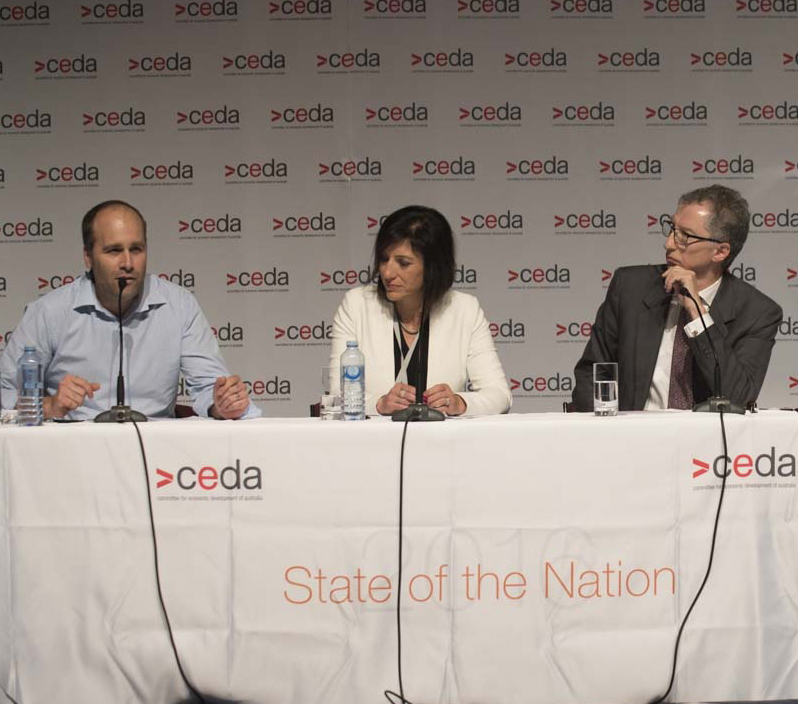 “As we move into the internet age, our public policy instincts are essential wrong,” he said.

“Digital goods are always and everywhere a potential public good.”

The traditional way we create policy and deal with goods, that is letting the market decide is clearing away, he said.

Dr Gruen said it is important for governments to recognise this and develop the correct policy settings for the creation and use of these goods.

On another megatrend of today, Dr Gruen said there has been a surprising rise of “vox pop democracy”.

Also speaking on the panel, Giant Ideas Director and IoTAA – Smart Cities and Industries Chair, Catherine Caruana-McManus said the Internet of Things is important because it touches on a range of portfolios from economic development to the environment.

“I think it’s something we need to be debating and having more energy applied to for Australia as an innovation nation,” she said.

Discussing connectivity, Ms Caruana-McManus said it is vital for Australia to be an innovation nation.

“For us to have an innovation imperative, we must activate industry and business also with connectivity,” she said.

“It has to enable that so people can have 24/7 capability.”

Ms Caruana-McManus said Australia is currently falling behind on connectivity in comparison to OECD countries.

“Countries such as Korea and Singapore are reaping the benefits of cohesive and comprehensive strategies around the backbone of fast broadband and the internet,” she said.

“There is an overarching need for Australia, for the OECD to kick start the economy and reinvigorate where we are and this is this notion of the innovation imperative,” he said.

Dr Hajkowicz said as countries in Asia develop to advanced economies, Australia must develop into a more advanced services economy.

Food and agriculture are key opportunities for Australia and we must capitalise on the increase of “high value nutrition markets” that is market with increasing interests in safe, healthy food.

“Digital allows us to close the gap between the Shanghai food consumer buying the tomatoes in the store and the grower who made them in Victoria,” he said.

Watch videos from State of the Nation 2016.

Invasion of Ukraine 'could very well be' the beginning of international economic decoupling, says ICC representative

Many countries would be wondering how to build resilience into their own economic systems following economic sanctions levelled at Russia over the invasion of Ukraine, International Chamber of Commerce​'s Head of Global Engagement Damien Bruckard has told a CEDA forum.

Business investment is at a 30-year low and is not mirroring the optimism seen in other economic indicators like household spending plans and consumer confidence, NAB’s Chief Economist, Alan Oster, told the audience at CEDA’s Economic and Political Outlook (EPO) 2021.

Australia can punch above its weight but must choose its battlefields, Siemens Australia, CEO, Jeff Connolly has told CEDA's 2014 Economic and Political Overview forum in Melbourne.