Tasmanian Treasurers call for costed promises ahead of election

Tasmania’s Treasurer and Shadow Treasurer have both called for fully costed policies ahead of the state election in March.

During the CEDA Economic and Political Overview event in Hobart, Shadow Treasurer of Tasmania the Hon. Scott Bacon said the Liberals have promised a lot of things to get a front page, without providing any idea of the actual cost to the state budget.

“The Labor party does challenge the Liberals to ensure that all of their policies are submitted to Treasury with enough time for them to be fully costed because we know they’ve made a lot of promises,” he said.

“At current count the Liberals have made more than $2.5 billion worth of promises.

“They’ve openly bragged about spending more money on health and education than Labor.

“At the same time, they’re committing to building fantasy bridges across the Tamar, underground bus malls, dual-lane causeways and a fifth lane on the Southern Outlet.”

Mr Bacon said Labor will commit to benchmarking its budget reporting against New Zealand which has consistently received the top ranking in the international Open Budget Survey.

“Labor believes that the most important element of budget management is honesty,” he said.

“We all know numbers and statistics can be cherry picked and manipulated to say pretty much anything.

“If you’re not honest about the state of the finances how can you hope to engender trust and confidence in the economy.

“Labor believes in increased budget transparency, under the Liberals the budget papers have become the most opaque in the country.”

Mr Bacon said it is the decisions that were made by successive Labor Governments that laid the foundation for the prosperity Tasmania enjoys today.

“Labor’s strategic investment in our competitive advantages has placed our key economic sectors on a rapid growth path,” he said.

“The state did not enter net debt during the period of the last government, we continued to invest strategically, and we welcomed a record number of interstate and international visitors.”

Mr Bacon said the Treasurer has lost control of the finances through the election period.

“He has been overridden by panicked backbenchers desperate to access the pork barrel across the electorate,” he said.

“In contrast Labor’s policies are responsible and they are deliverable, we’ve chosen to focus on the fundamentals of providing good quality government services.” 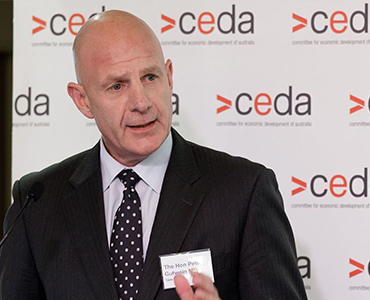 “The facts are that the Labor/Green minority government were living beyond their means; our economy went into recession and at the peak more than 10,000 jobs were lost,” he said.

“In 2014 we rolled up our sleeves and we got on with the job to repair the state’s financial position, to restore public confidence and to get the economy moving forward.

“We are now, in my view, in one of the strongest financial positions that we’ve had as a state in memory.”

Mr Gutwein said a recent Sensis report showed that Tasmanian businesses are the most confident in the country.

“With perceptions of the state economy at the most positive now for a decade, I’m pleased to add that our policies were the most popular of any government across the country,” he said.

“A far cry to just prior to the last election when two out of three Tasmanian businesses thought that the Labor/Green minority government’s policies were actually working against them.”

Mr Gutwein said the Liberal’s aim was to have the lowest unemployment rate out of all of the states.

“We want to have a 40 per cent increase in apprentices and trainees, as well as reducing the youth unemployment rate by the end of the next term,” he said.

“That’s why we’ve announced record levels of infrastructure funding, payroll tax relief and direct support for apprentices and trainees, as well as targeting the lowest and most attractive energy prices in the country.

“We’ve acted on cost of living by announcing our plan to lower power and water prices and have committed to no new or increased taxes and to keeping government fees and charges linked to CPI.

“We’ve made our commitments clear, it’s up to Mr Bacon today to commit to a surplus and to releasing a financial statement that clearly demonstrates what impact their policies will have on the budget bottom line before the election.”

This year has been one of the most successful in CEDA’s 55 year history. Watch the highlights below.

Why the world has reason to watch the WA Senate election

If Australia is to secure the next wave of LNG development, the Federal Government must keep an "open mind" about further industrial relations reform, Australian Petroleum Production and Exploration Association (APPEA) Advisory Board Chairman, the Hon. Martin Ferguson AM has told a CEDA conference in Perth.