The business of age

Residential care for people with dementia is well over $1 billion a year to the Australian government, University of Sydney, Faculty of Medicine, Curran Professor in Health Care of Older People, and Geriatrician, Professor Susan Kurrle has told a CEDA audience.

Speaking in Perth at The business of aged care event, Professor Kurrle said that as 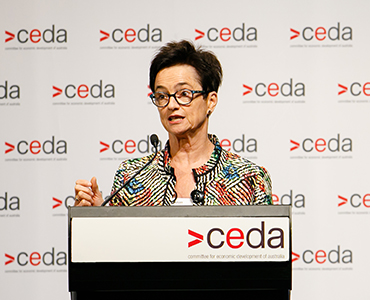 we live longer, we need to live in a community that supports dementia.

“Every year, in Australia, we add one month to our life expectancy,” she said.

“At 90, one in two of us will have dementia. Which means if you don’t have it, you’ll be living with someone that does.

Professor Kurrle discussed results from recent research which asked, what is the cost of good quality dementia care?’

“This particular…research is probably the most detailed research that has ever been done in Australia in terms of looking at costs.

“Five hundred and forty-one residents, most with dementia and their carers were interviewed… in 17 facilities, both homelike…and traditional in four (non-profit) organisations across three states in Australia,” she said.

Quality of life and quality of care was examined, alongside activities, health and care costs including medicare data, hospitalisations and medications.

“What we found…is that the home-like model is more cost-effective than traditional models,” she said.

“What we know is that for people with dementia, the home-like model of care…showed significantly higher quality of life, lower hospitalisation particularly presentations to the emergency department and lower use of psychotropic medication.”

Also speaking at the event was Brightwater Care Group, CEO, Jennifer Lawrence, who discussed the importance of the aged care industry to Australia’s economy.

“We are a large industry, $17.6 billion makes it a significant player in the Australian business scheme,” she said.

“It is an industry in growth.

“There is huge social changes partially driven by government reform, but also by consumer demands.

“Aged care is in a disruptive phase.

“The government has been working on… the aged care roadmap which has significant reforms based on not only ensuring we continue to have a world class system but also to make it sustainable in the future.

“The key elements of that road map are a real shift to consumer directed care. The emphasis is on customer choice, and ageing at home.”

Ms Lawrence said key factors for company success in the disruptive period included a strongly led strategy, organisational agility including being able to respond to a changing market, a strong customer focus, a high level of business and financial acumen, and having a skilled, stable and well led workforce in a supportive culture.

Mr Jacobs said that the Department of Health’s recently commissioned report by the Australian Health Services Research Institute at the University of Wollongong, determined that the Aged Care Funding Instrument (ACFI) funding tool is no longer fit for purpose, and a blended mixed model is needed to measure the assessment of care needs going forward.

“If that does get acted upon, it will be a huge disruptor into funding and we will see how total funding is affected, and also how the government repositions itself at that point in time,” he said.

Following the 2017 Federal Budget, Mr Jacobs said they believed next year would be a big budget for aged care, however, sector sustainability in regards to supply and demand will make government less likely to fund current commitments meaning a continued shift towards the user pays model.

“It is a big challenge to cultural expectations, so we’re going to have to reassess our thoughts on the great Australian dream: intergenerational wealth (and) inheritance tax will undoubtedly come to the floor at some stage,” he said.

“How do we fund aged care going forward? We need some fundamental changes to society.”

“Consumers will demand more and providers will respond to that in terms of the range of services,” he said.

“The shift to funding control means there’s going to be more providers therefore more competition and that will have a natural flow on to price sensitivity and improving the cost effectiveness of services as we move forward.”

“There are three factors which weigh into the GDP and economic impact here,” he said.

“Productivity is the first and we’ve heard a lot about robotics and systems and designs and how do we get more efficient to try and optimise and I guess make the system cope a little bit better with some of the challenges: changing preference, changing needs, but also the weight of numbers we’re expecting to see through this system.

“Population is next…we’re not going to see the step change that we need in terms of resourcing and labour to really deliver to this market.
“The third is participation. We’ve heard firsthand about the absolute importance of keeping our older people – 65 plus, which is the recognised definition – engaged and active, and feeling ownership of what they do.

“How do we minimise the impact from people having an income and all the implications around ownership and presence in a job to maybe having some ability to self-fund.

“We need to think about how we can bring older Australians into the working environment.  It’s in neighbourhood design, it’s in job definitions, and the use of IT and technology and the sort.

“Participation is our responsibility; old people are still people and they still have a lot to give so are we doing enough as a community to bring them in?”

Experience is an asset, not a liability: Ashton Applewhite, anti-ageism activist

“Longer lives require us to work longer, to save more and yet age discrimination in the workforce is rampant,” anti-ageism activist and writer Ashton Applewhite has told a CEDA audience at an event in Adelaide.

Hospitals are dangerous places to be, they’re unfamiliar, you’re on drug regimes in unfamiliar places and unless you’ve got a nurse looking after you full time, you’re at risk of falling, SA Department for Health and Wellbeing CEO, Dr Chris McGowan told a CEDA audience in Adelaide.

The eradication of Polio in India has inspired hope that extreme poverty can be eradicated by 2030, Global Poverty Project, Global Policy and Advocacy Manager, Michael Sheldrick has told a CEDA leadership forum on Transformative ideas in the 21st Century in Perth.