There are things to be optimistic and pessimistic about in achieving true gender diversity both in Australia and globally, Woolworths, Nine Entertainment Co., AMP, Australia Post Non-Executive Director, Holly Kramer has a told a CEDA audience in Perth.

“On a bad day, when I’m having a cup half empty day on this topic, quite frankly I despair at the current global zeitgeist,” she said. 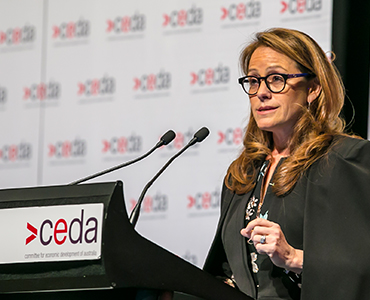 “Brexit, Trump, Pauline Hanson, (the) axis of xenophobic anti-globalisation, anti-immigration and anti-establishment – not that there aren’t some real reasons and drivers behind all of this sentiment but the solutions they are offering I think are frankly wrong and are very damaging to the prospects of achieving productive diversity in our society and true feminism here and around the world.

“I’m (also) disappointed that childcare and parental leave seem to have slipped off of our national policy agenda and that things like female representation in cabinet has gone backwards.”

Ms Kramer said while it can be a gloomy picture, there were reasons to be optimistic.

“I see three of our most important global leaders – Angela Merkel, Theresa May and god willing Hillary Clinton, as role models. World leaders that will be role models for my daughter and all of our children,” she said.

“I see that nearly half of the new ASX director appointments this year have been female so we’re not 50/50 yet but at that rate we are certainly gaining ground.

“On a daily basis I do meet more and more of what I call true believers in the need for diversity, the belief that diversity drives better outcomes.

In regards to achieving a balance between a career and family, Ms Kramer said there is a broader question to be asked.

“It is such a difficult topic to talk about because there are no simple answers, there is no one single answer.”

Discussing the Committee of Perth’s report, Filling the Pool, Ms Kramer specifically highlighted the recommendation which said ‘boards need to understand and embrace the economic rationale for gender equality as a strategic competitive advantage which will provide the imperative for the need to change.’

“The change needs to start from the top: people actually need to believe diversity matters and that it’s good for business,” she said.

“It’s especially the CEO. You can set…targets for diversity as a board but I dare say the change does not really happen until the person is actually a real believer that change is going to make a difference to their business.”

Also speaking at the event was McKinsey & Company Australia and New Zealand, Managing Partner, John Lydon who said the global economy could benefit $12 trillion from increasing female participation in the workforce.

“In Australia it’s a trillion, but even in this state it’s a couple of hundred billion dollars – which is even more than the iron ore,” he said.

“If we can put all those things in place, then we will get the benefit as a society and I personally think we will get better outcomes.

“That’s going to cost a bit of dough. And that’s the problem…I think to get that $12 trillion dollar benefit you’ve got to invest about $2 trillion globally in those things.

“What we’ve got to do is call on our policy makers to start thinking about how we are going to make that investment and when we’re considering policies whether it’s education or the tax treatment of childcare or anything like that, we’ve got to say what’s the gender lens? What’s the inclusion here? Not just the economic lens in the short term.”

“Anecdotally what you continue to hear is the lack of supports in place,” she said.

“There have been dramatic improvements over the last 20, 30 years…things have changed but I think we have plateaued a bit.
“It’s time now to look at and really interrogate some of those barriers that really remain, around flexible work arrangements, around supportive work cultures and in particular having a really good mix of childcare supports in place that suite different phases of a family’s responsibilities.”

“The thing that’s really good, is that we’re talking about it and it’s not just pointed at females now making a choice between careers and family,” she said.

CEOs need to commit to dealing with gender diversity in tangible ways for progress to be made Nestle Australia Ltd, Chairman, Elizabeth Proust AO told a CEDA audience in Brisbane.