PIT Forum 2020: the role of regulation and regulators in building and maintaining trust in emerging technology

enabling innovation. Some see the quality of regulatory practice in relation to innovation as an increasingly important source of competitive advantage in a world of rapid technological advance. But regulators and regulations are increasingly challenged by the breadth, depth and speed of technological change.

Susan Makatoa, Group Managing Director at Edelman Australia outlined evidence from the Edelman Trust Barometer that highlights concerns in the Australian community related to the pace of technological change and the government’s ability to keep up.  Specifically:

The Edelman work also showed that at the beginning of the year, none of our institutions (government, business, NGOs or the media)  were seen to be both competent and ethical, yet both of these attributes are critical to earning trust.

Having outlined this rather dire landscape, Susan did observe that through COVID-19 there has been a trust ‘bump’ or uplift, particularly for governments. Perhaps there is an opportunity to build on that?

Stephen King, a Commissioner with the Productivity Commission, reflected on the performance of regulators as regards emerging tech and presented a mixed report card. Echoing comments made in other sessions he noted that regulators could do a much better job of better using existing laws to demonstrably address areas of concern. He outlined a number of cases he believed could/should have been run in Australia.

Stephen also expressed a view that often regulators seem to go in search of a problem, especially when things are moving quickly, and communities are concerned.  This seems to be the case in terms of the ACCC focus in regard to media and digital platforms, where it is not clear how making new media or platforms pay for old media makes sense and where perhaps the market would have sorted itself based on brand and reputation.

Sam Nickless, COO at Gilbert+Tobin, agreed that regulators struggle when things are moving quickly.  He noted that ex-post enforcement is a big stick that focusses on the risk of harm or damage, creates risk and uncertainty for business and is probably having a dampening impact on investment.  Sam advocated for a more ex-ante approach, with regulators acting more like a trust broker, with greater emphasis on engagement and collaboration up front. Such an approach could support trust in the direction and impact of regulation for both business and community and improve business investment.  The challenge is that while there remains and over reliance on ex-ante enforcement, it is hard to get business to be completely open, which in turn undermines regulator trust in business. This is the “distrust begets distrust theme” identified by Hilary Sutcliffe in the opening session of the forum.

Business has noticed a more collaborative approach from government through COVID-19, according to Sam, and perhaps that represents a new opportunity.  It is certainly the direction that countries like the UK have headed.  Sam concluded that there is scope to tilt the regulatory balance in favour of seeking to pursue opportunity (and not just focus on risk) through collaboration and ex-ante engagement.

Stephen and Sam agreed on the importance of regulating businesses with significant market power in the interest of consumers/community, and the need to be alert to the significant information asymmetries that exist between big tech and regulators/government.

The panel discussed how this asymmetry and the competency deficit of regulators and policy makers (perceived and real) might be addressed. There was support for the concept of a body or institution on the government side to reflect public interest in reviewing opportunities and risks associated with emerging technologies (similar-ish to an Office of Technology Assessment), noting that:

As an aside, Sam noted the extent to which the government’s performance with its own tech use and implementation earned or eroded trust in its competency (referencing the COVID-19 app, robo-debt and the census).

In terms of building broader tech and data capabilities within government and regulators, Stephen noted the difficulty of doing this and recommended an approach focussed more on regular and transparent engagement and collaboration with trusted sources of expertise (academics etc), using the framework and intent of ‘trusted users’ advocated in the Productivity Commission’s Data Access and Use report.

Susan rounded out the discussion well in the context of earning community trust by observing that as an adviser to business she has always stressed a ‘regulate yourself’ approach and being seen to do so as the best way to earn trust and avoid adverse regulatory outcomes. 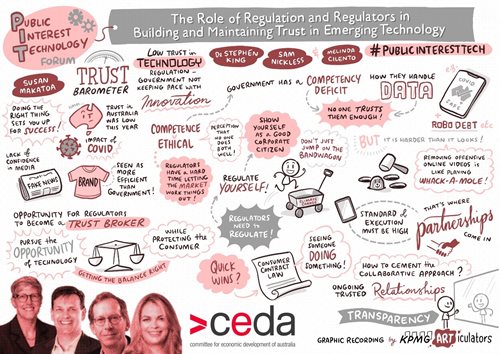 CEDA's PIT Forum was supported by our Foundation Partners:

Read highlights from CEDA’s PIT Forum 2020 with CEDA CEO Melinda Cilento and SocietyInside and co-director of the WEF TIGTech program, Hilary Sutcliffe, who opened the Forum asking, “what would change if the governance of technology were to consciously consider the earning of trust?”

SON2017: Good at Innovation, bad at communicating it

There is a whole lot that we’re doing here in Australia that has really good bones…but we’re just not very good at communicating that success, MTP Connect Managing Director and CEO, Sue MacLeman has told a CEDA audience at State of the Nation in Canberra.

Disruption is the new normal and Australia will need to maintain its flexibility if it is to adapt to workforce changes coming due to digital disruption, Federal Department of Finance Secretary, Jane Halton AO PSM has told CEDA’s State of the Nation conference.