With the federal Government expected to deliver a Budget surplus in the coming days, Jeremy Thorpe asks if it is enough to convince the public that the economy is in good shape.

Let us know your opinion
Public statements from the federal Government affirms that a surplus (Figure 1) is going to be delivered on 2 April; but should we be excited by the prospect of a Budget surplus?

We recently polled over 1000 members of the public and asked them how they would prioritise the upcoming Commonwealth Budget in terms of their preferred emphasis on spending and taxing. The number one preference was around small government, that is, lower taxes and lower government expenditure.

The public views on the economic outlook for the country are dour; with almost 60 per cent believing the economy will be worse or the same in the next two years. The Government can point to the surplus as a sign of successful financial management.

For many Australians, wages growth, job security, and the cost of living are the priorities and the Government will need to balance these worries with the country’s future prosperity, especially at a time when oncoming concerns are prevalent.

The difficulty is that the Government would be wrong to go rushing headstrong into claiming this surplus as a victory and be tempted to waste a good surplus with short-term approaches. 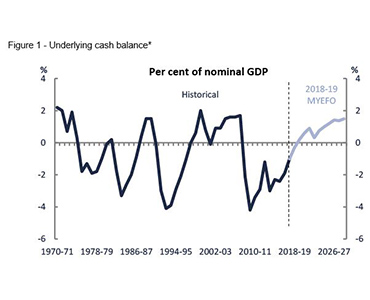 To answer why they shouldn’t look at short-term fixes we need to understand how the budgetary position has changed since the Global Financial Crisis (GFC). 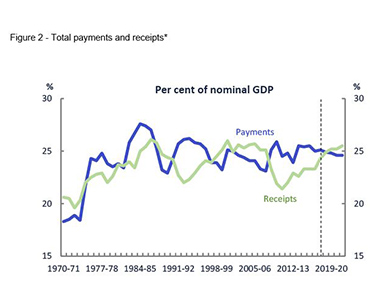 Correspondingly, we saw government spending increase as welfare payments increased and the Government sought to pump-prime the economy with additional spending.

It is fair to say that Josh Frydenberg is expected to preside over a Budget surplus this year through a combination of luck and some prudent economic management.

On the expenditure (payments) side we have seen improved spending restraint, in part aided by the strong labour market which has reduced the call on welfare spending.

On the revenue (receipts) side: The concern is that, in an election year, both sides of politics will have an incentive to spend this windfall. But the projected surpluses are so small as to be mere rounding errors in the context of the total budget.

In a time when there is a real concern about oncoming headwinds squirrelling some additional funds away becomes increasingly important. This is not about saving for saving’s sake; it is about: Even in this environment, we should see the Government and Opposition committed to personal tax cuts to address: This is certainly a balancing exercise between short-term sentiment and long-term concerns. The Government has been prudent to get to this surplus; we suggest that the country would benefit if further prudence prevails.

See all articles
Jeremy is a Partner in PwC’s national Economics & Policy team and is the firm’s Chief Economist. He formerly worked at the Commonwealth Treasury and the Productivity Commission.

We need more nuance in the migration debate

The migration debate whether in the media, in parliament or around the barbecue all too often moves to the negatives, perceived or real, of a larger population. It should come as no surprise therefore to see headlines saying that closing the borders has made 26 million Australians richer. Headlines like this obscure the nuances behind the impact of migration on Australia’s economy.

Lock in a new decade of business investment

A recent CEDA survey of 41 chief financial officers from big Australian businesses found that more than 60 per cent of the firms surveyed are planning to increase their capital expenditure in the next 12 months, writes CEDA Chief Economist Jarrod Ball.

If the fair go goes, where does that take us?

Tim Gartrell reflects on CEDA's Community pulse survey and examines what the findings say about Australia's embedded notion of the fair go.