After hearing the Federal Treasurer’s triumphant Budget speech, and with a cursory reading of the Budget papers, one could walk away feeling relatively comfortable about Australia’s economic position as we wade through the COVID-19 pandemic. The Budget predicts that nominal gross domestic product (GDP) growth will be 10.75 per cent this year, with real GDP growth of 4.25 per cent. Unemployment is at a 13-year low of four per cent and is projected to fall further to 3.75 per cent over the next two years. Importantly, this level of economic activity is a significant improvement compared with what was forecast in last year’s May Budget.

Let’s not be lulled into a false sense of security.

Our immediate growth is strong as we rebound from the pandemic, fuelled by the hangover from the sugar-hit of government stimulus and our skyrocketing terms of trade. But like most sugar highs, we will inevitably experience the challenge of withdrawal.

Our domestic economic growth will also face a hit, thanks to a reduction in global growth triggered by the inflationary pressures caused by the Russian invasion of Ukraine and inflationary pressures more generally; and a series of domestic factors such as rising interest rates and increased spending being directed to important but non-income producing activities such as defence, the NDIS and aged care.

Combined, this means that the national economic growth trajectory will slip.

Indeed, the 2022-23 Budget projects real GDP growth in 2022-23 of 4.25 per cent, declining to 2.5 per cent in 2025-26. Taking an even longer-term perspective, as shown in the following chart, we see our real GDP growth declining over time to average growth rates lower than over each of the past five decades. 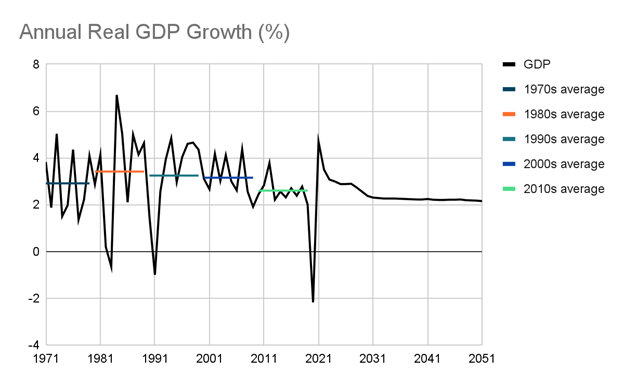 This projected decline in economic growth reflects a series of long-term structural challenges, including declining productivity, an ageing population, and a projected fall in Australia’s terms of trade – that’s code for a fall in the iron ore and coal prices.

There are a series of implications associated with this long-term lower growth.

One of these is that fiscal repair will be more challenging for governments. With this lower level of growth, and in light of the revenue and spending commitments in the 2022-23 Budget, we project that the Commonwealth Budget will not return to balance until 2036-37.

Related is the issue of government debt, the Commonwealth and state and territory governments – with the notable exception of Western Australia – subscribed to considerable new debt as a necessary measure to respond to the challenge of an effectively-closed economy at the height of the pandemic. Indeed, although still well below many comparable countries (see figure below), the Commonwealth has increased its net debt by 38 per cent since COVID-19.

Net debt as a percentage of GDP

While there has effectively been no extra expense associated with the cost of servicing this extra debt because of the reduction in interest rates, at some stage these debt servicing costs will increase and future generations will bear the brunt.

Should we be concerned and seek to pay this debt off as soon as possible?

The short answer is no.

History shows us what we need to prioritise.

Australian Governments did not rush to pay the debt off, and in fact, never explicitly paid it off. Instead, during this time, Australia experienced a generational boom, with strong economic and wage growth, rapidly increasing material standards of living and falling inequality, all while running relatively modest government deficits.

The result was that the level of government debt to GDP fell sharply and was ‘largely eliminated by the beginning of the 1970s’ – 25 years after the end of the war. In effect, the combination of economic growth and inflation saw the economy outgrow the debt; the size of the debt became relatively less material as the economy grew.

Along with stabilising spending, growth should now be our priority after another (but different) cataclysmic shock.

PwC Australia’s post-Budget modelling shows the fiscal benefits available if we prioritise economic growth. If we can grow GDP half a percentage point faster per annum than we currently project (i.e., after the Budget’s forward estimates), then this would mean that we would:

It is easy to say ‘grow faster’, but how? And how does this year’s Budget help do just that?

Broadly, there are three levers Government can pull to grow the economy, commonly coined the ‘3Ps’:

In other words, we need to pull all three levers, acknowledging that sustained economic growth needs to be underpinned by sustained productivity growth.

There are the old reform chestnuts that keep getting repeated: tax reform; industrial relations; regulatory reform (and particularly the reform of Commonwealth-state relations); and public service modernisation. These are mainstay recommendations because we are confident that reform in these areas address fundamental inefficiencies and will stimulate growth. But we also acknowledge that timing can be everything, particularly after a major global social and economic shock and particularly in an election year.

A number of measures in this Budget support future business-led growth and are particularly welcomed:

The Budget is notable for its $17.9 billion of additional infrastructure investment, with a particular emphasis on connecting regions and markets to maximise growth opportunities. The challenge now is the realisation of these investments in the face of a real workforce challenge; the Budget’s new measures will not provide a panacea for this workforce crunch in the short term.

The Budget also commits to a range of industries and regions that we might not perceive as a strength now but are critical to our future prosperity: space; critical minerals, advanced manufacturing, and the development of Northern Australia and our relationship with India. Hopefully, this is the accelerant these industries and regions need to take off.

Going forward, we will need a laser-like focus on growth – growth that is both sustainable and equitable – that will inevitably require us to all embrace the shiny new reform things as well as the reform chestnuts that neither side of politics yet seems willing to tackle head-on. It’s an imperative becoming increasingly harder to ignore.

See all articles
Jeremy is a Partner in PwC’s national Economics & Policy team and is the firm’s Chief Economist. He formerly worked at the Commonwealth Treasury and the Productivity Commission.

In the first in a regular series on the Australian labour market for CEDA's Recovery: coming back better project, CEDA Senior Economist, Gabriela D'Souza, shows that COVID-19 is already having a significant impact on the labour market, particularly among young people.

Contributing author to How unequal? Insights on inequality, Professor Peter Whiteford, explains that Australian millennials' incomes have grown more than baby boomers and millennials in other countries.

Budget 2015: Why I worry about public debt

In the lead up to the 2015 Federal Budget, Dr Rodney Maddock discusses public debt and the need to reduce to deficit to insure Australia against economic crises.
Read more
View more