CEDA Senior Economist Cassandra Winzar says that Western Australia’s economy has escaped the worst impacts of COVID-19 and the state should now focus on building the economic foundations that will see it thrive into the future.

Let us know your opinion
Yesterday CEDA hosted its annual WA State of the State event, which brought over 750 people together in person to hear from Mark McGowan, who with an approval rating of close to 90 per cent, is Australia's most popular Premier.

WA always operates at a different pace than the rest of the nation, and this is certainly true of its COVID-19 recovery. After a protracted economic downturn in the years leading up to 2020, the WA economy has emerged from the COVID-19 period as the strongest in the nation, and the only state to post a budget surplus. Positive health outcomes and a buoyant iron ore price have boosted the state’s economic standing and budget position.

WA now has one of the lowest unemployment rates in the country. The state recorded economic growth in the 2020 financial year and is expecting further growth in 2021. Strong conditions in mining, construction and regional tourism have led to talk about skills shortages and potential wage pressures. WA responded strongly to the easing of COVID-19 restrictions – spending at hotels, cafes and restaurants increased by 45.7 per cent in the September quarter. This is a great result, although clearly not sustainable. 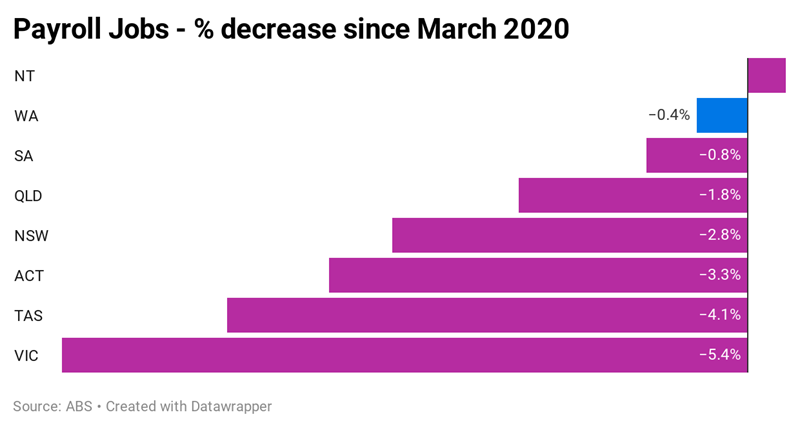 After implementing careful precautions around COVID-19, the state’s mining sector has continued to operate at full capacity throughout 2020. High iron ore prices, boosted by supply disruptions in Brazil, have encouraged increased production, such that iron ore exports are now at record levels. Strong gold prices have further contributed to the state’s good fortune.

A combination of federal and state home building grants has led to a surge in housing construction – bringing with it reports of increased prices and skills shortages. Land sales in WA increased by 132 per cent over the last year, albeit from a low base. With home building and investment activity at record lows in recent years, Perth’s rental vacancy rate is now less than one per cent – lower than at the height of the mining boom. With the current rental eviction mortarium due to end in March, this raises the question of where many renters will go.

Behind the positive headline figures, many businesses and households confront significant headwinds, and Western Australia cannot forget about those not doing so well. Higher education is a key sector struggling and is likely to continue to do so well into 2021. Despite strong conditions in some regional tourist areas, CBD-based tourism, high-end tour providers and retailers are doing it tough without international and interstate tourism. The LNG sector continues to be affected by low oil prices, and decisions on new capital projects have been deferred until at least next year.

Despite touting itself as an ‘island within an island’ during COVID-19, WA cannot stand on its own forever. Interstate and international trade and tourism are important to the state economy and will eventually need to be restored. Borders are expected to be open to most states in early December, which will assist some sectors and is welcome news for families looking to reunite for Christmas. More broadly, international trade relationships will need continued care and maintenance in light of strained relations with China and a continuing global trend of creeping protectionism during the pandemic.

WA and its economic fortunes continue to rely heavily on the mining sector, in particular iron ore. Efforts to diversify the economy have been limited, and while a hot topic during downturns, tend to fall away during periods of strong mining growth. Now is the right time to be considering how to strengthen Western Australia’s economic foundations by encouraging investment in new industries and lifting productive capacity through policy reform.

The short-term recovery has bought the state time but increased spending is likely to be required over coming years. WA has an opportunity to plan for longer‑term reform and targeted infrastructure spending – investments in technology, social housing and social infrastructure would provide both short-term stimulus and longer-term growth. Measures announced in other state budgets, such as the large social housing spending boost in Victoria and stamp duty reforms in NSW, are policies WA should consider.

The WA election in March 2021 is rapidly approaching and as Parliament wraps up for the year the parties are focussing on the emerging campaign. The new Liberal Opposition Leader, Zak Kirkup, has confirmed that his government, like the current government, would leave COVID-19 management to the Chief Health Officer. This means energy policy, retail trading hours, cost of living, and infrastructure spending as areas we are most likely to see new policy positions on.

Western Australia has managed the pandemic and its economic impacts relatively well. We should now use this foundation to build a strong and sustained recovery that benefits the whole economy and community into the future.

See all articles
Sriram Srikumar is the Engagement Manager at AlphaBeta Australia. He has worked for public and private sector clients in policy design and transactional law. As a consultant at the World Bank’s Pacific office, he worked on projects in renewable energy, transport infrastructure and rural development. Sriram also worked on private equity and project finance transactions at the law firm Herbert Smith Freehills.
CW

See all articles
Cassandra Winzar is Senior Economist (WA) at the Committee for Economic Development of Australia (CEDA). Prior to joining CEDA she was Principal Economist at the WA Department of Communities (Housing Authority) where she focused on WA economic conditions and housing related research, including running the state government’s Housing Industry Forecasting Group. Cassandra has also held roles as the WA based Economist for the Reserve Bank of Australia, and in Transfer Pricing at EY. Cassandra has a Bachelor of Economics (Honours) and Bachelor of Arts (Asian Studies) from the University of Western Australia.

In the first in a regular series on the Australian labour market for CEDA's Recovery: coming back better project, CEDA Senior Economist, Gabriela D'Souza, shows that COVID-19 is already having a significant impact on the labour market, particularly among young people.

Melinda Cilento: we need to be ambitious about Australia's future

Budget 2019: Money in people's pockets but the need to enhance productivity remains

In a follow up piece analysing the Federal Budget, Jeremy Thorpe writes the Government should be congratulated for being responsible with its announcements. He argues, however, that a need for a true productivity enhancing reform agenda remains.