Australia’s electricity markets are in transition. What are the trends and implications for new investment types that may be required in the future? Oliver Nunn, Ryan Esplin, Alan Rai and Tim Nelson explore.

Let us know your opinion
Australia’s electricity markets are in transition. Demand for electricity is declining in some jurisdictions, households are installing distributed solar PV and older, traditional large-scale electricity generation infrastructure is being replaced with new technologies. In this article, we explore these trends and their implications for the types of new investment that may be required in the future.

Trends affecting residual demand In recent years we have observed three trends that are changing the profile of residual electricity demand. Residual electricity demand is demand net of relatively low-cost forms of variable generation such as distributed solar PV and wind. These changes are: flat demand growth in the National Electricity Market (NEM); changes in the large scale generation mix; and the rapid up-take of behind-the-meter rooftop PV. 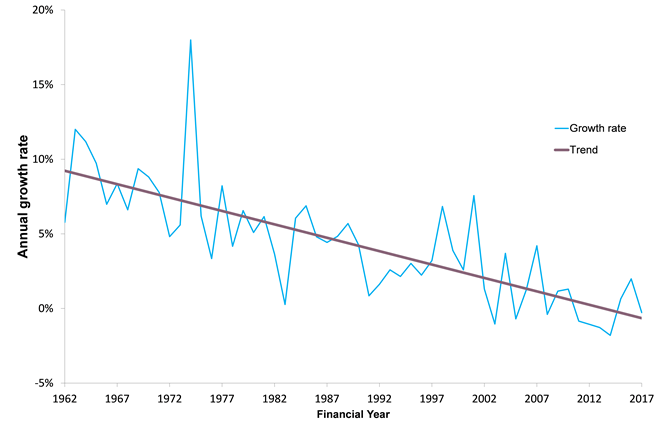 Source: Department of Environment and Energy

With the exception of Queensland, demand in each region of the NEM has been flat or falling over the past decade. This follows on from a broader trend of declining electricity demand growth rates in the NEM over the past 50 years (see Figure 1). This is largely a reflection of the changing structure of the economy, with a decline in energy-intensive sectors such as manufacturing, and an increase in energy efficiency amongst both large and small consumers. Flat demand growth is not unique to Australia with many other advanced economies experiencing a flat-lining of electricity demand growth in recent years.

Changes in the large-scale generation mix

There are two significant trends that have shifted the mix of large-scale generation in the NEM. First, a number of older power stations have been retired from service. And second, there has been a significant increase in investment in variable generation across the NEM. The term variable generation is used to refer to generation which is produced when fuel is available (e.g. solar PV when the sun is shining) irrespective of electricity demand. In 2018 alone, more than 4000 MW of intermittent capacity was added following the retirement of several older power stations in the period between 2012 and 2017. This is shown in Figure 2. 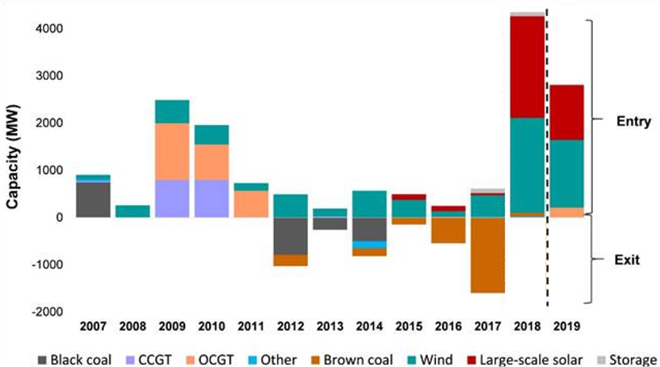 Australia has some of the highest penetrations of household solar PV of anywhere in the world. This rapid uptake of behind-the-meter solar PV is likely to continue. By the late 2030s, AEMO projects there will be around 20,000 MW of rooftop PV capacity in the NEM, a projected three-fold increase on current rooftop PV capacity.

The combination of contracting demand growth and the surge of new variable generation capacity has significant implications for the optimal future generation mix. Renewable technologies, such as wind and solar PV have very low marginal costs. It follows that when wind farms and solar PVs generate power, they displace generation from traditional thermal generators. Therefore, to determine how much ‘room’ there is for a new ‘firm’ generation, we must remove the amount of generation provided by ‘non-firm’ technologies from the aggregate demand curve. The demand that is left over is termed residual demand. The confluence of the above factors, namely, flat demand with increasing intermittent generation leads to significant changes in the size and profile of residual demand.

Source: AEMC analysis
By way of illustration, Figure 3 shows residual demand and solar generation from a typical winter day in Queensland:
This analysis shows that low-marginal-cost generation, in the form of rooftop solar and large scale solar, have resulted in residual demand becoming more volatile and varied over the day.

Source: AEMC analysis
These market and technological trends mean that future generation will need to be sufficiently flexible to meet the changing profile of residual demand. Changes in residual demand mean traditional technologies that are designed to operate at high capacity factors, which have correspondingly low ramp rates and high start-up costs, are unlikely to be dispatched at the levels required for efficient operation. Flexible technologies, such as a peaking gas plant, pumped hydro and battery storage are likely to be better suited to the changing profile of residual demand.

It will be important that market participants continue to evolve the types of financial contracts available in the NEM to mitigate wholesale price risks. Contracts should preserve the relationship between the physical needs of the power system at any point in time and strong financial incentives on the plant to operate consistent with these requirements. This is particularly important for variable technologies that are not dispatchable.

This blog was authored in collaboration by Oliver Nunn, Ryan Esplin, Alan Rai and Tim Nelson.

The Federal Government announced a significant funding increase for hydrogen power generation earlier this month. ACIL Allen Director Science and Technology and Australian Academy of Technology and Engineering Energy Forum Chair, Dr John Söderbaum FTSE, considers the reasons for this investment, the role hydrogen could play in the post-coronavirus recovery, and the factors that continue to hold back the development of a green hydrogen industry.

What will the energy mix in Australia look like in five years?

Advisian Asia Pacific Director of Energy and Water, Matt Robinson looks at what Australia’s energy mix will look like as the country transitions from a high emissions industry to one that integrates renewables to a much higher level.

Reviewing the Finkel Review and the political response