Following the 2015 Federal Budget, Professor Susan Thorp examines the proposed changes to the Age Pension, means testing and retirement income.
Back to all opinion articles

Risks to the retirement income of many Australian households will increase because of changes to the means testing of the Age Pension proposed in the 2015-16 Federal Budget. Others will enjoy greater risk protection. While the direct implications of the proposed asset test for retired households are clear, there are also important ramifications for people still in the workforce.

An estimated 91,000 people from retired households whose assets make them ineligible for a part-pension under the proposed arrangements will lose a safe, inflation-insured component of their income. They will also lose the partial protection against poor investment returns that the asset test provides.

The asset test also insures the future retirement incomes of households who are now in the workforce. People who reach retirement with a low superannuation balance because of a bad run in the labour market (unemployment, carer responsibilities, low wages) or poor investment returns are partly compensated with a higher Age Pension. Households with more ability or luck in the accumulation phase get less.

By shrinking the scope of the Age Pension and steepening the taper rate, the new proposal reduces the value of this insurance for a large number of households while changing the effective protection given to others.

The graph below shows how the proposed changes work for a single home-owning pensioner. The vertical axis shows the annual Age Pension entitlement for each assessable asset level on the horizontal axis. So that we can see the income and assets tests on the same graph, I assume that all income is deemed from assessable assets. The pension payment will be the least amount assessed under either the income or asset means test.

The equivalent numbers for couples are an increase in the free area to $375K (now $286K) and cut off at $823K (now $1,151.5K). The amount of single pension starts at $22.4K per annum, then begins to decrease because of the income test (solid line) when wealth is around $150K, follows the flatter income taper line down until the proposed asset test (dotted line) cuts the income test line at around $277K (compared to $240K currently). Payments then decline down the dotted line until the cut-out point at $547K ($775.5K). 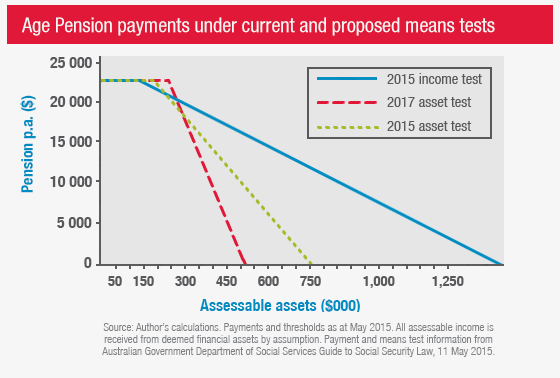 The decrease in safe lifetime real income to pensioners at each level of assessable assets is the vertical distance between the old taper (dashed line) and the new taper (dotted line).

Pensioners who want to replace their lost pension by drawing from their private savings would need to spend at most about 1.8 per cent of assessable assets but since pensioners tend to preserve their capital, a more likely response from many is lower spending.

Pensioners who become ineligible also lose the hedge against poor financial returns that the current taper creates. The current taper increases income by $39 for the loss of $1K of assets. Since investment risk becomes more expensive and lifetime real income declines under the proposed regulatory change, demand for life annuities among these households might increase. Low interest rates notwithstanding, the Age Pension is a substitute for an indexed life annuity stream.

On the other hand, the steepening of the taper would give remaining part-pensioners a stronger disincentive to save while also compensating them at double the rate ($78 per $1K) for financial losses.

Pensioners on the new taper are likely to take on more risk, both to compensate for the higher implicit tax on income from investment returns and to make the most of the better hedge when things go badly. These pensioners are likely to prefer account based pensions with substantial allocations to growth assets.

Critics of means tests highlight the disincentives they create for people to save. But the lifetime income insurance provided by the asset means test for Australian households now experiencing the vagaries of the labour market should not be overlooked.

The Government’s proposed modifications to the means test will target this insurance to a smaller group of households while also increasing the sensitivity of future pensions to the level of wealth people accumulate while they are working.

The lower overall cost of the Age Pension to the Budget will also reduce the tax burden on current and future tax payers.  As superannuation accumulations rise over coming decades these settings should be reviewed.

See all articles
Susan Thorp is Professor of Finance at the University of Sydney Business School. Susan researches household and consumer finance with a particular focus on retirement savings and decumulation.

Philips Australia and New Zealand Managing Director Matt Moran says Australian healthcare providers have adapted to the challenges of the pandemic, but it will take a focused effort and broad collaboration to catch up with rates of technology adoption and engagement seen elsewhere in the world.