In the 2009 WYC, Australia maintained its ranking of 7th place of the 57 nations.

Public finance, foreign direct investment, and technological infrastructure are preventing Australia from competing internationally, according to the world's most comprehensive and long-running competitiveness study.

In 2009, Australia maintained its ranking of 7th place of the 57 nations included in the study.

The US has maintained its #1 ranking due to IMD's definition of competitiveness, which accounts for 'soft' factors such as quality of life, environment and knowledge management.

The survey shows the biggest decline in overall performance (measured by largest percentage change) was in the government's financial position, with the budget surplus dropping from 1.6 per cent of GDP to 0.1 per cent of GDP. The Yearbook was also compiled before last week's federal budget.

While Australia's budget position has been one of the strongest in the OECD to date, it ranked 17th of 57 countries covered by the Yearbook. 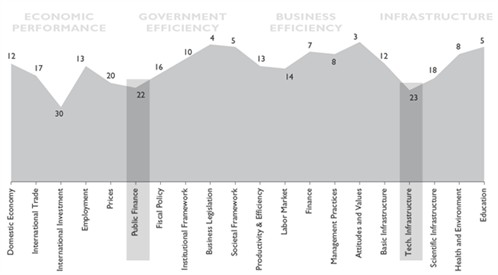 Communications technology, mobile phone costs and internet bandwidth speed are noted - for the second year running - as the most significant infrastructure weaknesses.

The 2009 Yearbook includes a 'stress test' on competitiveness - an assessment of how countries are likely to fare through the global financial crisis.

Australia is in 8th place, behind Denmark, Singapore, Qatar, Norway, Hong Kong, Switzerland and Sweden. The US and UK are absent from the list of countries likely to fare best through the global financial crisis.

The 'stress test' is based on a combination of: economic outlook for 2009; business and government resilience; and social measures.

Following the referendum on the United Kingdom's continued membership of the European Union, CEDA's 2016 Information Paper, Brexit explained, discusses the leave and remain campaigns, implications for business and the economy, political fallout and implications for Australia.

This big-picture CEDA research collection looks at Australia's place in the globalising world economy of the early 21st century. One key conclusion: distance is not dead as a challenge for Australia.

Tony Makin argues that Australia's persistent current account deficits are no cause for concern.