State of the Nation: Critical services in a time of a pandemic: staff and safety first

At State of the Nation leaders from critical service organisations discussed how they have adapted in the COVID-19 crisis to support not only their customers but their employees as well.

AGL CEO and Managing Director Brett Redman said the starting point was to make sure they were projecting calm leadership, highlighting that COVID-19 was also a crisis of confidence.

He said the response had included transitioning their workforce of 4000 to work from home, including their call centres, and over this period looking after their mental health as well as their wellbeing in the return to work transition.

“We’ve had the same engagement surveys saying you've really looked after us as we've dispersed, now we really want you to look after us as we head back to the office,” he said.

“People are really watching what we do next and how we manage that return to office. The return to site is going to be really important for mental health and for engagement with our people as well so they feel safely treated through it so I don't expect anyone is going to go back to the old model of working, it's going to be some kind of hybrid.

“How we look after people through this is going to be so important to maintaining engagement and mental health going forward.”

Mr Redman said one positive had been the reception from customers and asking their essential workers if they were ok, showing a transition in the community. 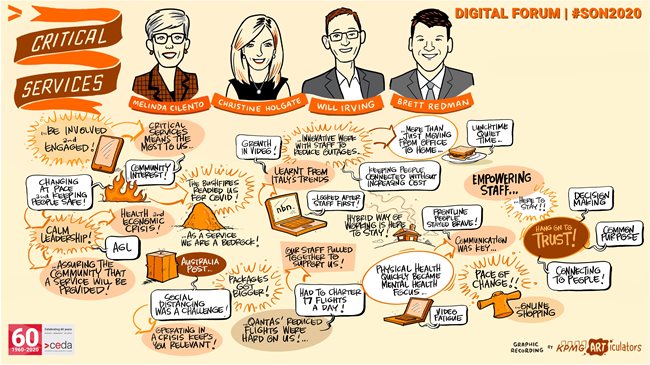 “Before the crisis, one of our biggest challenges was community trust. The community is seeing a proof point of how we act at that moment of truth and the resonance that we're getting with customers is really positive as we're seeing through our survey work there's been a big restoration of trust in the sector, (there’s) a long way to go…that’s not to say that the job is done but there's a platform there to start a fresh conversation with the community that says when you need us we're there and it's resonating.”

“Our strategy has been quite simple; it's protect, serve, safeguard,” Australia Post CEO and Managing Director Christine Holgate said.

Ms Holgate touched on what was done to protect their workers including PPE, safety glass in store and shift work in the processing plants to ensure social distancing.

“Throughout the period parcels are up about 90 per cent but it’s not just the number, the size and weight of these parcels were up about 40 per cent,” she said.

“We’ve had 10 weeks operating like the size of Christmas.

“Our largest partner is Qantas. Just as we felt we were starting to get on top of things then of course Qantas sort of reduced its domestic network and that's what we use to carry our letters and parcels across the country.

“We found ourselves in a situation with parcels still surging, that we had to charter effectively 17 aeroplanes every day flying our parcels, we've had to open 16 pop-up facilities, we've had hundreds of employees from more parts of the organisation volunteering to come and help out in that parcel part as we serve the country.”

Ms Holgate also reflected on the increased operational costs in ensuring that their staff were protected and they could serve the community, with the organisation seeing pay cuts for the board, no bonuses and increased staff leave in April, keeping the costs down to invest into the frontline.

Speaking on staff health and safety, Ms Holgate highlighted the bravery of their staff in being on the frontline and the importance of having the right support systems in place for them including EAP and a cascading support system for one-on-one check-ins as well as for the workforce at home.

NBN Co Chief Strategy and Transformation Officer, Will Irving discussed how they reached out to international companies to look at what to expect in consumer demand and usage, contacting Telecom Italia with Italy being one of the first countries to go into lockdown.

“We faced two issues, one is what is the peak download time and it's in fact in the evening so normally about nine o'clock on a Friday night is historically the busiest time for our network and it's people home watching Netflix, doing online shopping,” he said.

“What Telecom Italia was seeing was a 35 to 40 per cent increase in traffic in the evenings and it was because people were not out at the restaurants, they weren't out with friends, the sport had stopped and so we initially thought that's what we need to target as the likely uplift.

“In the daytime, we knew it would go up more than that.

“From that mid to late February we knew that we thought that was what the trend was going to be and we brought forward essentially nine months’ worth of work in our core network.

“For things like video this time of day we've seen five years’ worth of growth happen literally in a matter of weeks.

“The good news is that demand is slowly coming down, (but) we'll never go back to where it was in February.”

To support the community, the NBN held their February billing level so that retailers were not charged for the extra usage and demand.

To protect their staff, Mr Irving said physical precautions and safety measures were implemented to support frontline workers while moving forward, he too saw a hybrid way of working for their office team.

“We've learnt to work this way. We just did a survey of our staff…and only a small percentage of staff would want to work in the office five days a week for the time being at least, so we think a hybrid way of working is going to be here for a long time to come,” he said.

“We now have a quiet hour between 12:30pm and 1:30pm and that recognised not only that people were working from home but with our schools and kinders and so on, there was an added layer of caring responsibilities that many of our staff have, that they didn't have when they were at the office.

“A quiet hour where we officially have no meetings, which let people make lunch for the kids or going to exercise or walk the dog or whatever, it’s about balancing the day and it's in fact done a huge amount for the mental wellbeing, and by the way for productivity in the afternoon.

There are some different ways of operating…(but) we've seen that be a particularly useful thing for our organisation.”

Why we need competition in human services

We need competition in human services because “too often our approach to helping people is to tell them what is good for them… rather than asking what do you need, how can we assist you,” Monash University Adjunct Professor and Productivity Commission Commissioner, Professor Stephen King has told a CEDA audience.

Service sectors, including health and education, should be the focus of a productivity reform agenda if Australia is to sustain economic growth, is the message CEDA Chief Executive Professor the Hon Stephen Martin will be taking to the Prime Minister’s Economic Forum in Brisbane today.