The latest report in CEDA's Disrupting Disadvantage is out now.

The 2011 CEDA/Business Spectator survey revealed that productivity and infrastructure are the key topics the business community want Governments to focus on in 2012.

The survey also found that while the Federal Government was rated as most effective on fiscal policy, generally policy decisions in 2011 were considered ineffective by the majority of respondents.

The Big Issues survey aims to highlight issues of national importance for the business community. The survey was developed with input from CEDA's Research and Policy Advisory Council with the intent of revealing the issues of key concern for business people. The results will help inform CEDA's future research and its thought leadership forums.

Over 1100 CEDA trustees and Business Spectator readers evaluated the performance of the Federal Government and assessed major policy challenges for Australia in the year ahead.

1. How effective have the overall public policy decisions of the Australian Government been?

The first year of a minority government, confronted with a sovereign credit crisis and a simultaneous Chinese-fuelled business investment boom, failed to impress the business community with its managerial capacity.

In contrast, only slightly more than 3.5 per cent of respondents thought the Australian Government's public policy decisions were very effective.

2. How effective has the Australian Government dealt with specific policy issues?

Overall the difficulties in executing policy in a minority government contributed to an average rating of approximately 2.3 out of 5 for its effectiveness across all policy areas.

The area to receive the lowest average ranking was how the Government's decisions had impacted the regulatory burden on businesses. Possibly because of policy responses to climate change and the industrial relations system, respondents gave an average ranking of 1.8, partway between being considered somewhat effective to ineffective. Almost half of respondents, 48 per cent, considered the government to be ineffective on this policy issue.

3. What will be the most important area for reform to ensure Australia's ongoing economic prosperity?

Respondents rated ensuring adequate infrastructure and fiscal policy as being the most important issues for Australia's ongoing prosperity. These issues were closely followed by that of education and industrial relations. However, most of the Government's policy activity has been focused on the issues at the other end of the spectrum. In particular, the climate change policies were ranked as being second least important and the national broadband network was the third least important issue for Australia's ongoing economic prosperity.

Q4. What are the most relevant actions that can be undertaken to create more flexibility in the economy?

Respondents were requested to rank which area of policy reform would enhance the flexibility of the Australian economy, and hence its overall productive capacity. Both industrial relations and reducing the level of government regulation were considered to be important policy issues where reforms could enhance the flexibility in the economy. Facilitating interstate labour mobility was considered the least important issue.

Q5. What are the most relevant actions that can be undertaken to create more capability in the economy?

Respondents were requested to provide a relative ranking of the importance of each area of policy reform for enhancing the capability of the Australian economy, and hence its overall productivity. The options for consideration, in order of respondent rankings, were: providing sufficient infrastructure, reforming vocational education, encouraging higher levels of workforce participation, reforming higher education, introducing more flexibility in the migration program, and encouraging more female participation. The average ranking for each category is described in Chart 2.

The issue that was perceived to be the most important for improving the capability of the Australian economy was delivering adequate levels of infrastructure. Respondents indicated that extreme infrastructure bottlenecks and population-related pressures in Australia's capital cities emphasised the need to deliver timely public infrastructure.

Q6. What are the best ways to meet the future requirements for infrastructure?

7. What is the most economically efficient method of achieving the policy objective of a five per cent reduction in carbon emissions by 2020?

CEDA trustees and Business Spectator readers were asked to provide a relative ranking of four options to reduce Australia's carbon emissions by the five per cent target by 2020. The policy options were ranked: direct action, enhancing the renewable energy targets, an emissions trading scheme (ETS), or through international abatement credits. The responses are described in Chart 4.

The policy option of a program of direct action was considered to be the most economically efficient method of achieving the policy goals of carbon abatement whereas an ETS was ranked as the third most economically efficient method. However, there was a marked split in respondents' assessments of the ETS with it receiving almost as many "most efficient" rankings but also receiving few "moderately efficient" rankings. In contrast, a program of direct action was ranked last by an almost equivalent number of respondents to an ETS. The difference in response rates is described in Chart 5. 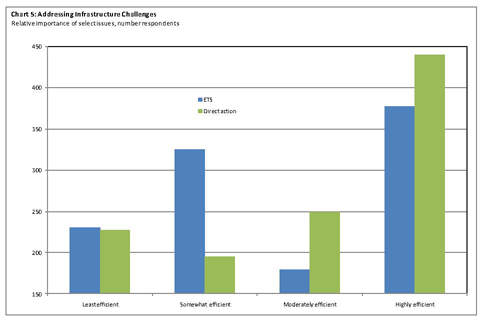 8. What are the biggest issues confronting Australia in the year ahead?

Improving Australia's productivity was considered to be the most important issue for Australia to address in the year ahead by a substantial margin, almost an entire rank more than the next most important issue. Potentially reflecting the nature of the challenge, addressing the impacts of climate change was rated as being the least relevant to Australia's economic prosperity next year.

Preparing for future jobs, the Federal Budget deficit, tax avoidance and the GST have been highlighted in CEDA's 2016 Big Issues survey as the top issues affecting the Australian economy.

Discussion paper prepared for CEDA by Dr John Edwards, Reserve Bank Board member and Lowy Institute Visiting Fellow. In this paper, Dr Edwards suggest some of the major questions we need to think about in sustaining Australia's prosperity. This paper was released in June 2012.