Due to NSW's COVID outbreak, Copland in Sydney will now run across March and April.

Australians need to know where they fit in the future economy

Leaders and policymakers need to tell Australians where they fit in the economy of the future, Federal Leader of the Opposition, the Hon. Bill Shorten told a CEDA audience in Canberra.

Back to all media releases articles 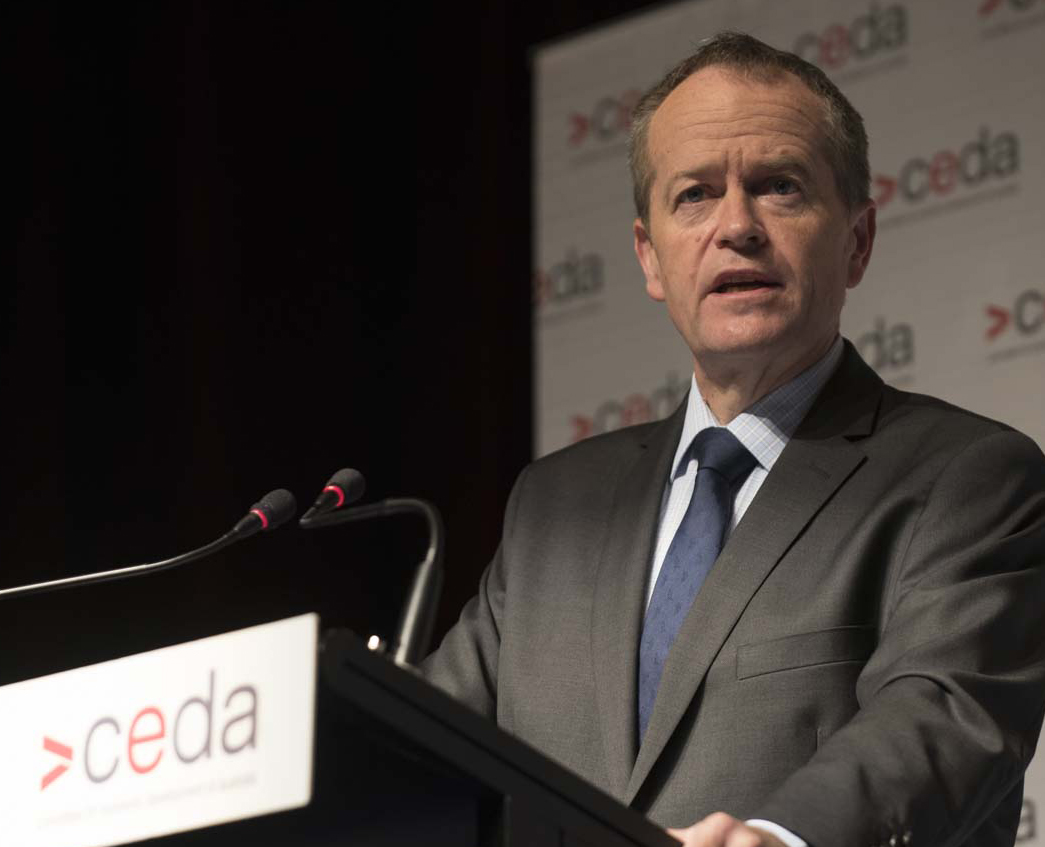 Mr Shorten began his address at CEDA’s State of the Nation by outlining two issues facing centre-left leaders across the world.

“The first is how do we make change work in the interests of middle and working class people,” Mr Shorten said. “This question of how we best represent the interests of a squeezed middle class, a class feeling under pressure, and of a working class not quite sure how they can better themselves or their children’s lives – this is indeed a big topic in first world nations.”

“This is a campaign which perhaps started as a de facto reality TV show, which has grown into a circus, and has now gone beyond farce. Thankfully, with every passing day, with every ridiculous and disgusting remark which is uncovered… the possibility of a Trump administration fails,” he said.

“By his own words and his own actions, he has confirmed the worst fears of millions in the United Sates and beyond its borders – that he is entirely unsuitable to be the leader of the free world.”

Mr Shorten said that Trump and other extremist political groups “draw power from people who have felt the rough edges of globalisation and economic change”.

“Workers who have been outsourced, downsized, rationalised; families feeling the pinch of flat wages. Widening inequality, declining living standards, marginalised and alienated groups being told that migrants, minorities or Big Government – that they’re all to blame,” he said.

Mr Shorten outlined what he saw as the real solutions: “There are solutions to change. Skilling our people. Investing in education. Addressing inequality. Promoting inclusion. Demanding the equal treatment of women in our society.”

“Now this message of sustainable growth promoting equality was a message that I heard from the remarkable and charismatic Prime Minister of Canada, Justin Trudeau, from the amazing Mayor of London, Sadiq Khan, and from the Mayor of New York City, Bill de Blasio – but they also emphasised that our citizens cannot be discarded and left behind,” he said.

“It is not enough to simply promote change, without explaining to our fellow citizens where they fit in.

“And in doing this we need to win the argument – we need to overcome the false choice and the simple solutions, and the proposition that the only way we deal with change is that there have to be winners, and losers. Us and them.

“We need to recognise that the mantras of innovation, disruption, can be a confronting message for Australians in insecure work.

“People need to understand that many Australians appreciate that the calls for a low wage, easy to hire, easy to fire, deregulated labour market do not deliver – and will not deliver – hundreds of thousands of high quality permanent jobs."

Referencing CEDA research, Mr Shorten said that change in the workforce was inevitable.

“Now, of course, as analysis of CEDA and others have made clear, the march of technology in our workplaces is unstoppable and it is unsentimental,” he said.

“Therefore, it is the job of Australian policy makers and leaders in our community to harness change, and make it work for people’s benefits. Making change work in favour of the 45 per cent of Australia’s current manufacturing workforce who have no post-secondary skills.

“People who came to this country – in many cases – off the boat and into the factories. Who have given their all physically and emotionally, for 20 and 30 and 40 years, to be simply told there’s nothing for them anymore – except perhaps the disability pension.

“These are people who are being stranded by innovation and change, unless we help them retrain and reskill.

“Nostalgia is not an economic strategy.

“I do not look back at the last 40 or 50 years, and see it as some sort of mythical golden age. Living standards were far lower. Exporters that could have flourished, suffered. Less than three in 10 Australians finished high school. University was a privilege reserved for the few. And the number one cause of (personal) bankruptcy was medical expenses.”

Mr Shorten said that we could not “turn back the hands of the economic clock”, and needed to be wary of those suggesting that it would be possible while also apportioning blame.

“I think a defining argument in the coming decade ahead, depends on making the case for a modern, growing fair, and inclusive economy,” he said.

“The proof that we have to offer about the benefits of change has to be practical, tangible, real... Explain to people where they fit in in the future. And the challenge for a parliament… is to demonstrate that we can deliver a genuine improvement in the lives and living standards of the people we serve.”

CEDA – the Committee for Economic Development of Australia – is an independent, not-for-profit membership organisation.

We identify policy issues that matter for Australia’s future. We work to drive policies that deliver better economic, social and environmental outcomes for Australia. We deliver on our purpose by: Leveraging insights from our members to identify and understand the most important issues Australia faces. Facilitating collaboration and idea sharing to invoke imaginative, innovative and progressive policy solutions. Providing a platform to stimulate thinking, raise new ideas and debate critical and challenging issues. Influencing decision makers in government, business and the community by delivering objective information and expert analysis and advocating in support of our positions. CEDA's membership spans every state and territory and includes Australia's leading businesses, community organisations, government departments and academic institutions. The organisation was founded in 1960 by leading economist Sir Douglas Copland, and his legacy of applying economic analysis to practical problems to aid the development of Australia continues as we celebrate 60 years of influence, reform and impact across the nation.;

CEDA – the Committee for Economic Development of Australia – is pleased to announce that Cassandra Winzar has started this week as Senior Economist, based in Perth.

CEDA report calls for nimble policy approach in key areas including population, technology and the workplace

CEDA’s latest report out today identifies a critical policy stack and a new approach to policy to reboot economic development in Australia and reconnect people to the benefits of growth.

CEDA is delighted to announce the appointment of Melinda Cilento as CEO, effective from Tuesday, 3 October, 2017.