State of the Nation: Prime Minister: we must resume the adventure of growth

Opening CEDA’s State of the Nation forum, Prime Minister the Hon. Scott Morrison announced details of the Federal Government’s Jobmaker plan, including increased spending on infrastructure and major projects and a reduction in Commonwealth approval times, and called for Australia to resume what CEDA’s founder Sir Douglas Copland referred to as “the adventure of growth".

The Prime Minister spoke about Australia’s progress through the pandemic, highlighting the nation’s “incredible resiliency in the face of our twin crises in health and the economy.”

“Our health response has been undoubtedly world class. Working together between states and territories and the Commonwealth we have bettered the response of other large developed economies around the world. We are one of a handful of countries that have achieved this level of success on the health front.

“Our response has followed a uniquely Australian path, getting the balance right between our health and our economic objectives. We have been able to keep large sectors of our economy open and functioning… this has not just yielded enviable health outcomes it has limited the economic impacts of the COVID crisis and allowed us to emerge more quickly and more strongly.”

The Prime Minister spoke about the difficulties facing Australia before discussing some of the thinking behind the government’s recovery strategy.

“The hit to our economy is significant and the road ahead will be very hard. There is a mountain yet to climb. It will take us an estimated two years just to get back to the level we were at prior to COVID-19.

“This is why we have a plan to lift this growth not just for now but for the next five years. The restoration of growth is also critical to our public finances. We are looking at a record deficit this year and next and not just because of record COVID-19 expenditures – revenues have taken an equally large hit. 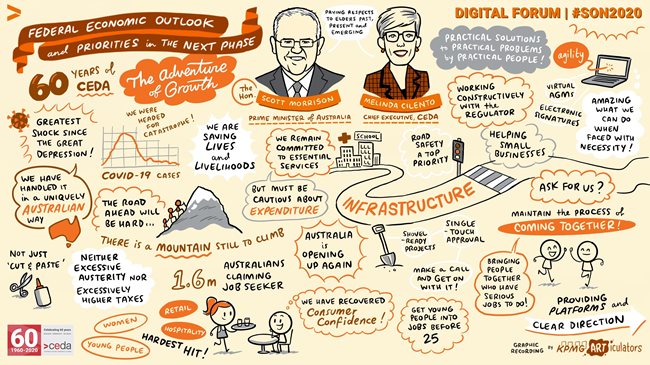 “We must be extremely cautious about our expenditure, especially as we work our way back from the record fiscal supports now in place. There will always be a case for spending more and for longer but it is not a wise or responsible course. Such a path is dangerous and will prejudice medium- and longer-term capacity to deliver on core supportive services.

“We will pursue growth and responsible budget management that ensure government’s live within their means and provide the essential services that Australians rely on as ever.”

As debate emerges about the case for retaining the supports the government has established such as Jobkeeper and Jobseeker, the Prime Minister argued that it is important that these supports remain temporary.

“If they are left in place for too long not only will it damage the capacity of the budget to deal with important essential services, it will dull the dynamism of the economy and stop the changes that need to happen to develop new jobs and allow the economy to move forward.”

Instead the Prime Minister emphasised the importance of infrastructure in the government’s recovery plan and announced some major new spending measures.

“As we come out of this COVID crisis and as we are on this road ahead, infrastructure development will play a critical role in our jobmaker plan.

“Today I am committing a further $1.5 billion to start work on small priority projects that are identified by the states and the territories. As part of this project $1 billion will be reserved for projects that are shovel ready.”

Alongside new spending, the Prime Minister announced a priority list of 15 major projects that would be fast tracked and would benefit from a renewed, cross-government focus on deregulation.

“Joint assessment teams will work on accelerating these projects worth more than $72 billion in public and private investment. Projects that will support over 66,000 ­direct and indirect jobs,” he said.

“Under our new approach, this investment, and most importantly jobs, will be brought to market earlier by targeting a 50 per cent reduction in commonwealth assessment and ­approval times for major projects, from an average of 3.5 years to 21 months.”

Some of the projects on the list of 15 include the Inland Rail from Melbourne to Brisbane, the Olympic Dam mine extension in South Australia, dams and emergency town water projects in NSW and rail and iron ore projects in Western Australia.

The Prime Minister said that the COVID-19 crisis has offered great lessons for regulators and legislators about the importance of pragmatism.

“This crisis has shown what can be achieved when regulators are pragmatic and responsive, solving crises without compromising safeguards,” he said.

“Far from weakening our performance this agility has helped our economy function, saved jobs and demonstrated what can be done when necessity is presented.”

This pragmatism has extended to what the Prime Minister called a “federation wide deregulation agenda” flowing from “a unity of purpose among national cabinet to get the jobs back.”

In concluding, the Prime Minister highlighted the “immense challenges ahead as we look to recover from our first recession in three decades”.

“It shows how important economic resilience must be for the future, it shows that we must never let the tension in the cord slacken when it comes to the changes we need to make to ensure lives and livelihoods. We need to return that growth that will support real and sustainable jobs, the wages that support families with all the decisions they want to make, and importantly the essential services our country relies on.”

Economic recovery stronger and faster than anyone expected: Victorian Treasurer

Despite the cost of the recent lockdown in Victoria, the Victorian economy has strong foundations for economic recovery, Victorian Treasurer Tim Pallas told an audience at CEDA’s State of the Nation.

Our success in responding to the four forces reshaping our country and the global economy – technology, demography, sustainability and shifting economic weight towards our region – rests on innovation, Federal Department of Prime Minister and Cabinet Secretary, Dr Martin Parkinson has told CEDA’s State of the Nation Conference.

Read what the ACTU's Jeff Lawrence, and former Workplace Relations Minister, Peter Reith, had to say on industrial relations/productivity.