The black art of economic forecasting

Professor the Hon. Stephen Martin and Sarah-Jane Derby discuss economic forecasting in the Australian context including recent Federal Government budget forecasting.
Back to all opinion articles

Economic forecasting is at the foundation of monetary and fiscal policy. Robust forecasting underpins Australian economic and social policy.

However it would be naïve to expect forecasts to be right.

Economic variables are notoriously difficult to forecast. All forecasts have a margin of error, a degree of confidence and represent one of many possible outcomes given other uncertainties.

The one thing that is certain about economic forecasting is they will almost always be wrong. Minor differences in outcomes may not have any major impact on policy implications and decisions. However larger variations particularly in the opposite direction (for example falling rather than rising real wages), can have more dire consequences.

The Global Financial Crisis (GFC) is the obvious one and few mainstream economists predicted the greatest economic bust since the Great Depression.

Anecdotally, in Australia, forecasting the exchange rate of the Australian dollar, particularly against the US dollar has also been notoriously difficult, with too many unpredictable variables affecting its movement.

In hindsight accuracy of forecasting has more often than not been questioned. As show in Figure 1 governments’ forecasts of the budget position have been consistently different from the actual positions. 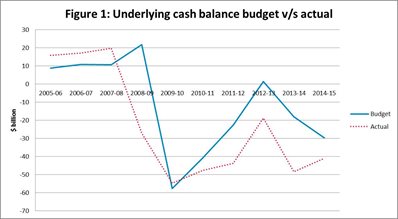 In the lead up to the GFC, between 2005 and 2008, Australia enjoyed a booming economy, with the mining boom in full swing.

The unemployment rate fell, cash interest rates were low, reflecting the prevailing economic conditions with real Gross Domestic Product (GDP) growth. There was talk of a rapidly appreciating dollar reaching parity with the US dollar.

Personal income tax cuts were common, so was largess described as middle-income welfare at budget time. Despite this, the Federal Government maintained a surplus of about 1.6 to 1.7 per cent of GDP.

But how did the Government fare with forecasting economic fundamentals and by extension, the budget? Not accurately but not too poorly either.

This trend was consistent prior to the GFC whereby the actual budget position was far more positive than the Government’s forecast.

While the forecasts were not accurate, the fact that the country was better off than expected (if budget surpluses are used as a measure) meant getting the final numbers wrong did not get as much scrutiny as it is now getting. 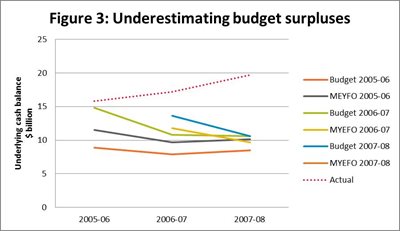 So what explains the gap? The 2007-08 Budget papers reveal the Government was more pessimistic about drought recovery than they should have been, meaning lower expenses in terms of drought relief payments. They also underestimated employment growth and as a result, personal income tax revenue. Some of the gap was also simply due to poor budgeting by departments following a reorganisation of programs and portfolios. These things are difficult to predict.

Figure 4 shows even in the 2007-08 Mid-year Economic and Fiscal Outlook, economic forecasts predicted a healthy budget surplus up until 2011. The red dotted line in Figure 4 shows the actual budget outcome or a budget deficit of 2.0-4.0 per cent of GDP over the period.
Initially the GFC had little effect on budget forecasting as shown in Figure 5.

Just a few months before Lehman Brothers collapsed, the 2008-09 Budget revised the surplus upwards from about 0.8-1.1 per cent to almost 2.0 per cent of GDP.

By December 2008, the Australian Government was well aware of the GFC and introduced measures including guaranteeing bank deposits and bank wholesale funding and a $10.4 billion Economic Security Strategy to help protect the country. These measures led to a downgrade of the forecast surplus, but unsurprisingly a surplus was still forecast.

The quote below helps to understand the forecasters’ reasoning.

“Australia's economy is in a much stronger position to withstand the fallout than most other countries. Economic growth remains solid and compares favourably with other advanced economies that are close to, or in, recession. Australia will also continue to be a major beneficiary of the economic growth resulting from the industrialisation of emerging economies such as China and India. Furthermore, the Australian housing market does not possess the excess of physical stock that is evident in some overseas markets, particularly the United States.”

This was too optimistic which became obvious in early 2009, when the Government announced a $42 billion stimulus package to ensure Australia did not end up in a recession. By the 2009-10 Budget the Government predicted major slowdowns in emerging economies and larger-than-expected contractions in other major trading partners. 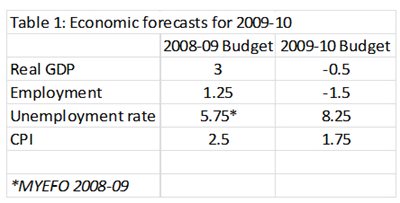 At the time, the Government, at the time, forecasted a quick recovery with above average growth in real GDP by 2011-12. This did not happen. Even in the midst of the GFC, economic forecasters were optimistic about Australia’s ability to return to business-as-usual be economic conditions fairly quickly.

While the economy never went through a technical recession and the economic fundamentals did not end up being as dire as expected in the 2009-10 Budget, between 2009-10 and 2012-13, Australia recorded budget deficits of about one to four per cent of GDP.

Although they initially forecast a budget deficit for 2012-13 in December 2009 (which was close to the final budget outcome for that year), they subsequently revised the deficit to a small surplus, as shown in Figure 6, which turned out to be wrong.

So why did they still get it wrong? The gap can be explained by lower than expected consumer spending, lower growth overall and low wage growth.

More importantly economic forecasters underestimated the impact of the end of the mining investment boom which negatively affected government revenues.

In September 2013, the Federal Government changed from Labor to the Coalition and so did budget policy. Returning to and maintaining a surplus became the primary objective. In the lead up to the first Abbott-Hockey budget the Government’s rhetoric firmly focused on the budget emergency and need to return to surplus.

The subsequent May 2014-15 Budget was full of promises to return to surplus by 2019-20, end the age of entitlement and cutback expenditure for the greater good of fiscal responsibility.

It is now recorded as one of the most poorly received and generally considered unfair budgets ever.  In the following months many measures were either dumped (the paid parental scheme) or revised.

What did this mean in terms of economic forecasting?

In terms of the underlying parameters, particularly some years after the GFC and with an, arguably, more stable economy, economic forecasters should have found it easier to predict economic fundamentals.

The 2014-15 Budget forecasts were based on the expectation that a contraction in the previous massive resources investment would “detract significantly from growth through until at least 2015-16”, subdued labour market conditions, economic growth and weak/falling commodity prices.

While the final 2014-15 Budget outcome has yet to be released, the December 2014 MYEFO and the Government’s May 2015 Budget confirmed the actual budget position is much worse than forecast.

“Since the 2014 15 Budget, this brings the total write down in tax receipts over the four years to 2017 18 to $52 billion. The rapid fall in the iron ore price has been the largest single contributor to write downs to Government tax receipts over the past year, contributing around $20 billion of the total $52 billion. Weaker expected wage growth since the 2014 15 MYEFO has also significantly downgraded expected tax receipts.”

However, lower-than-expected iron ore prices and slower-than-expected wage growth are not the only culprits. The Budget hinged on numerous reforms and legislation changes, most aimed at cutting expenditure, which did not eventuate. Ongoing negotiations with the Senate and delays in passing legislation severely affected the budget bottom line.

Government expenditure targets were also ambitious and perhaps unrealistic, with many economic commentators noting that they have been unable to replicate the budget bottom line predicted in budget papers, using independent models.

The rhetoric of the latest budget was completely different. The budget emergency was no more and while the government remained committed to a surplus by 2020-21, the surplus was not at the core of the Budget. In fact government spokespeople were stating a deficit in the range of $35-37 billion was acceptable and manageable.

The 2015-16 Budget revised estimates downwards, forecasting a bigger deficit than in the 2014-15 Budget shown in Figure 7.  Time will tell if the new, revised budget forecasts are right, but on past evidence, it is unlikely.

Budget forecasting is difficult for any government but even more so when the global economy is unstable, making it difficult to predict fundamental economic variables including unemployment rates, wages growth and GDP.

Even when the economy is relatively stable and external shocks are taken out of the equation, economic forecasts should not be taken as gospel.

Many variables are unpredictable. It would be wise for governments to manage the public’s expectations about economic and budget forecasts instead of promising surpluses that are reliant on uncertain reforms.

Recent Australian history shows that short-termism and a surplus fetish can be detrimental to the Government’s ability to forecast the budget bottom line.

In the previous four years, governments’ have been perhaps too unrealistic about their ability to rein in government expenditure to help with the budget bottom line.

While not arguing against a return to surplus, particularly in the medium term, the surplus fetish has led to unrealistic expectations about what can be done particularly as the economy continues to grow below trend.

Things are not changing. In the most recent budget, the Government forecasts expenditure to grow in real terms by just 1.1 per cent annually between now and 2017-18 – the long-term average growth is 3.0 per cent. It would be incredibly difficult for the government to show such spending restraint, particularly with an election expected next year.

Forecasting and budget forecasting will never be an exact science. However, setting more realistic expenditure targets and managing the public’s understanding around the art of forecasting would be good steps towards dealing with the problem.

Sarah-Jane is a Senior Economist at the Committee for Economic Development of Australia (CEDA) where she undertakes research on the economic and social policy issues affecting Australia. She has led research projects in a range of areas including industry, social and regional economic development policy.

Prior to joining CEDA, Sarah-Jane was an industry analyst at IBISWorld where she specialised in the analysis of manufacturing industries, including the automotive sector.

Professor the Hon. Stephen Martin has had a long and distinguished background in the Australian Parliament, academia and the private sector.

After hearing the Federal Treasurer’s triumphant Budget speech, and with a cursory reading of the Budget papers, one could walk away feeling relatively comfortable about Australia’s economic position as we wade through the COVID-19 pandemic. The Budget predicts that nominal gross domestic product (GDP) growth will be 10.75 per cent this year, with real GDP growth of 4.25 per cent. Unemployment is at a 13-year low of four per cent and is projected to fall further to 3.75 per cent over the next two years. Importantly, this level of economic activity is a significant improvement compared with what was forecast in last year’s May Budget.